The era of social audio 1.0 is in full swing, and while podcasts and Clubhouse have led the way, there are many other audio startups joining the fold. Quilt, an audio social network that focuses on wellness and community, has raised a $3.5 million seed round led by Mayfield Fund, with partner Rishi Garg joining the board, to do just that.

Quilt started as a community platform founded by Ashley Sumner, which let local folks meet up with one another in their own homes. Sumner was on the founding team at NeueHouse and has spent her career building community through physical space. Thousands of Quilt conversations were happening out of peoples’ homes until the pandemic struck in March, resulting in an existential crisis for the startup.

Sumner quickly moved Quilt over to Zoom but soon realized that video chat didn’t quite capture the magic that was happening in person, nor did it prove the right medium to foster the type of conversations that had made Quilt so special.

She worked to develop an audio app that would become the new Quilt 2.0, which went live in the App Store at the end of January.

Quilt allows anyone to start a room for a conversation, dropping a line or two of text to describe what they want to talk about. The app is focused on wellness, breaking rooms into three different categories: spiritual and personal development (with conversations around meditation, astrology, human design, etc.), career and purpose (“it was very important to link purpose to it,” said Sumner, “these aren’t networking events”), and relationships, sex, and family. 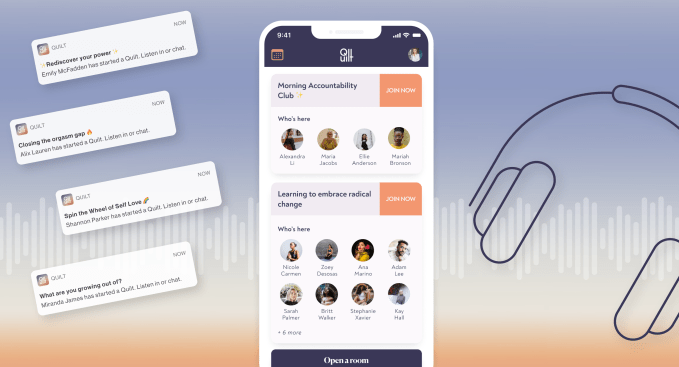 The platform has put specific focus on balancing the engagement levels of content creators and consumers. According to Quilt, 98 percent of hosts attend other hosts’ conversations and more than 50 percent of Quilters talk during any given conversation.

Garg, who has spent nearly two decades in the emerging media space, talked about how the engagement ratio among creators, consumers and ‘bystanders’ is different for each social platform based on the medium and product choices.

“With YouTube, the famous number was 1 percent create, 9 percent engage, and 90 percent sit back,” said Garg. “At Twitter, interestingly, it was 10 percent, 30 percent, 60 percent. If you look at something like Clubhouse, you’re seeing that parallel already happen. It’s like celebrity central. Part of what got us excited about Quilt was that anyone could just start a room. We really focused in on the pathway between being a consumer to being a creator. Starting or hosting a room is shorter than on any other social media platform.”

He added that the norms within the Quilt community are a big part of what makes that possible, saying there is a hurdle associated with platforms that are more celebrity driven or top heavy. Consumers look at the bar that is set by the community and feel they’re not famous enough, or don’t have a big enough community to contribute, he said.

“Part of the magic of Quilt is that everyone can feel like they have something to offer,” Garg explained. “I think it’s a lot more scalable and a lot less fragile than an ecosystem built entirely on celebrity.”

Retention also seems to be strong in Quilt’s early days, with 80 percent of sign-ups coming back for conversations every week. The company also said that around 60 percent of conversations are started spontaneously, rather than being a planned and promoted ‘event.’

Sumner says that Quilt will never generate revenue through advertising, but rather employ a freemium model.