Companies like Stripe and Twilio have changed the game for online businesses by making it easier to integrate payments and communications services into their customer interfaces without having to build those features from the ground up, or make costly investments to integrate them from elsewhere. Today, another startup is launching and announcing some funding in the hopes that it can do the same for financial features.

Unit has built a platform that lets third parties integrate banking services like payment cards, checking accounts, cash advances and money transfers into their own businesses by way of an API. And after quietly building the service (and a customer base) in stealth, the company today is announcing that it is open for business with $18.6 million in funding alongside that to continue growing — by adding in more features, hiring more people, and securing new users.

The capital is coming from a mix of investors that speak to the company’s Israeli roots and current San Francisco base. It includes Better Tomorrow Ventures, Aleph, Flourish Ventures, Operator Partners and TLV Partners, as well as 30 angels drawing on a pool of fintech experience among them.

CEO Itai Damti, who co-founded the company with Doron Somech (who is the CTO) said that the company’s mission is to make it easier for companies that have customers already doing some kind of transacting work with customers — for example, an on-demand transportation company interacting with its fleet of contract drivers; or an online bookkeeping platform providing services to users — to extend that into a wider and deeper and mor loyal relationship with more financial features.

“Companies in the freelancer economy are in the great position to bundle more banking services into their platforms for freelancers,” Damti said. Indeed many of these have dabbled in the past with providing other services such as payment cards as a way of paying out their commissions. Now, “it means they can help their freelancers track spending, as well as send payments to them.”

His belief is that by making it easier to incorporate these features, we will see a veritable explosion of businesses lining up to do so. “We have already seen a lot of pickup,” he said.

Large, incumbent banks have been relatively slow to bring their services up to speed with the pace of change in the world of tech, and that has opened the door to a number of challengers hoping to gain market share by providing more personalised services, more flexibility and better rates, all by way of efficient mobile apps rather than through queues in old buildings.

Unit’s bet is that there is an even bigger opportunity to provide banking services if you can identify places where people are doing work already. The global health pandemic, in its estimation, has increased that push simply because it’s bringing more people online than ever before, and they are looking towards the internet to get more work done than ever before.

The catch is that up to now, for companies that are not specifically in the business of fintech to provide those services, the costs — monetary, time, and labor — have been too high to make services viable. Unit says that its API-based solution solves that issue: 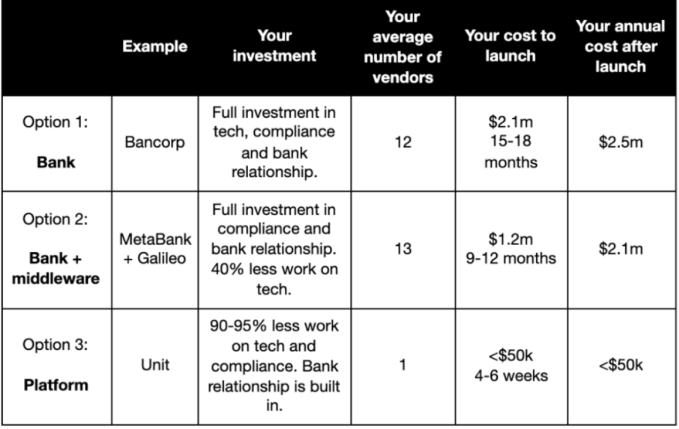 There are other companies that have identified the opportunity of “financial services as a service” and are growing at a fast pace tapping into that market.

One of the most notable, perhaps, is Rapyd, which was last valued at $1.2 billion about a year ago, with backers including the likes of Stripe alongside many other top investors.

Stripe, indeed, itself recently teamed up with banks to start an embedded business banking service of its own, Stripe Treasury, which underscores also the growing competition in this space.