Dating app Bumble announced today it’s changing how its “unmatch” feature works in an effort to better prioritize user safety. The change will make it more difficult for a bad actor or harasser to use the app’s unmatch feature in order to avoid having their conversation reported to Bumble’s safety team.

Before, when either side of a match opted to unmatch the other, the conversation simply would disappear. This, however, could be used by a bad actor to leave a conversation before the victim of their harassment had a chance to report them.

The change will eliminate that possibility. Following the update, when one user unmatches the other, the match and the chat with the other user will disappear for the person who does the unmatching.

However, for the person they unmatched, the conversation only becomes grayed out in their Chat Screen.

If they then click into that chat, they’ll see a message that informs them the other user had left. Beneath this is a banner offering access to support and a “Help” button. If there were no issues with the chat, the user who was unmatched can simply opt to delete the chat with the to remove this particular conversation from their inbox. 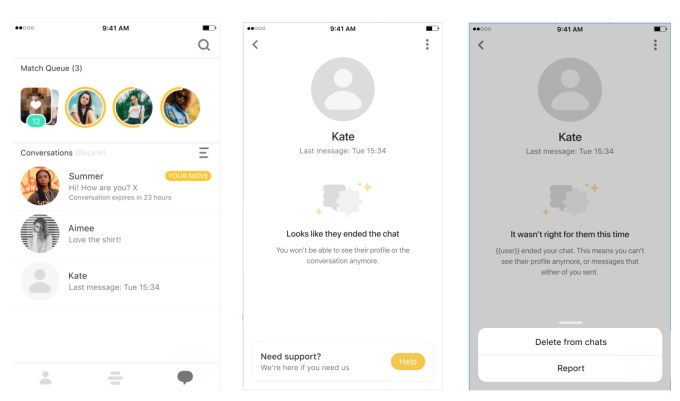 But if the user had been acting inappropriately in violation of Bumble’s rules, the person who has been unmatched will now have the chance to report the other user — even though the user disappeared and can no longer be directly messaged.

Bumble explains this change preserves the conversation history so it can still be escalated to review. The company also notes that, as of this update, it’s the only dating app that offers this option..

The change follows a high-profile story about the dangers with using dating apps — and specifically, Bumble’s top rival, Tinder. In an investigative journalism piece published by the Australian Broadcasting Corporation , 48 out of 231 survey respondents who said they had used Tinder had reported a sexual offense of some kind to the dating app maker. But only 11 of those had gotten any response. And these replies, when received, were only generic messages with no information about what action was taken.

As a result of the story, Tinder announced it was updating its reporting mechanism to respond to users in-app or on email and direct them to crisis counseling and survivor support.

But Tinder hadn’t addressed one of the key issues with how its dating app functions.

The story had explained how bad actors would use the unmatch feature to hide from their victims. By unmatching, they could delete their entire chat history, which could have been used to report the account to Tinder or even to law enforcement.

The new feature that Bumble has now introduced will prevent bad actors from being able to so easily hide.

While Bumble may get credit for being first to market on this front, it should not get a pass on the fact that it has operated its app without such a user protection in the first place — as have its dating app competitors.

Designed to facilitate social connections between strangers, (while monetizing slight advantages and conveniences), today’s set of dating apps have been built without a careful eye towards how their systems could be abused by those looking to harm and harass others.

For example, an investigation published by ProPublica last year found that Tinder and many other popular dating apps didn’t even screen for sexual offenders. At the very least, these apps should be offering built-in features that would allow them to block the worst offenders from their platforms.