Kandji, a mobile device management (MDM) startup, launched last October. That means it was trying to build the early stage company just as the pandemic hit earlier this year. But a company that helps manage devices remotely has been in demand in this environment, and today it announced a $21 million Series A.

Greycroft led the round with participation from new investors Okta Ventures and B
Capital Group, and existing investor First Round Capital. Today’s investment brings the total raised to $28.4 million, according to the company.

What Kandji is building is  a sophisticated zero-touch device management solution to help larger companies manage their fleet of Apple devices, including keeping them in compliance with a particular set of rules. As CEO and co-founder Adam Smith told TechCrunch at the time of his seed investment last year:

“We’re the only product that has almost 200 of these one-click policy frameworks we call parameters. So an organization can go in and browse by compliance framework, or we have pre-built templates for companies that don’t necessarily have a specific compliance mandate in mind,” he said.

Apple has acquired Fleetsmith, a startup that helps IT manage Apple devices remotely

Monty Gray, SVP of corporate development at Okta, says Okta Ventures is investing because he sees this approach as a valuable extension of his company’s mission.

“Kandji’s device management streamlines the most common and complex tasks for Apple IT administrators and enables distributed workforces to get up and running quickly and securely,” he said in a statement.

It seems to be working. Since the company’s launch last year it reports it has gained hundreds of new paying customers and grown from 10 employees at launch to 40 today. He has plans to triple that number in the next 12 months. As he builds the company, he says finding and hiring a diverse pool of candidates is an important goal.

“There are ways to extend out into different candidate pools so that you’re not just looking at the same old candidates that you normally would. There are certain ways to reduce bias in the hiring process. So again, I think we look at this as absolutely critical, and we’re excited to build a really diverse company over the next several years,” he said. 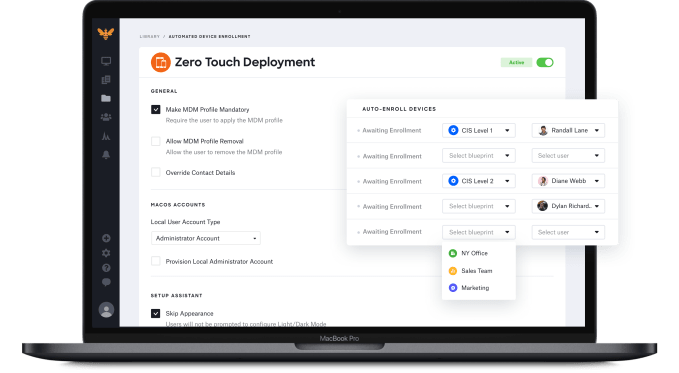 He said the investment will not only enable him to build the employee base, but also expand the product too. He says in the past year, it has already taken it from basic MDM into compliance and there are new features coming as they continue to grow the product.

“If someone saw our product a year ago, it’s a very different product today, and it’s allowed us to move up market into the enterprise, which has been very exciting for us,” he said.