Here’s the thing: 2020 is hard and there hasn’t been a ton of joy to bring around smiles. People have been grasping for any little thing that brings them happiness and lightens the moment.

Which is part of the reason why when a fly landed on Vice President Mike Pence’s head during the vice presidential debate on Wednesday night, everyone buzzed about it.

Watch it come in for the landing:

This wasn’t just a short visit either. The little guy hung on for a while. (For about two minutes and two seconds. Yes we timed it, you’re welcome.)

If Sen. Kamala Harris, the Democratic vice presidential candidate, or moderator Susan Page noticed, they did not say anything, but they were likely very focused on what Pence was actually saying.

It’s hard to separate the moment from Pence’s words: At the time, Pence was calling it an “insult” to law enforcement to presume that systemic racism and bias against Black people by police exist. The Trump Administration has repeatedly touted law and order instead of trying to empathize with the racial justice protests that have been widespread this year, even as that systemic racism has repeatedly been laid bare, including with the recent deaths of George Floyd and Breonna Taylor.

But obviously, people outside the room immediately took note of what was happening, including Speaker Nancy Pelosi, who tweeted that the “election is fly-ing by. Make sure to make a plan to vote.” The Biden campaign immediately saw an opportunity to fundraise and swooped in.

The election is fly-ing by. Make sure to make a plan to vote. https://t.co/dMhxJsRcW7#BidenHarris2020 #VPDebate2020

lord of the lies pic.twitter.com/crmdtRNjlT

People were already speculating about who would be cast as the fly on Saturday Night Live alongside Beck Bennett as Pence.

This going to end with Pete davidson in a fly costume perched on Beck Bennett's shoulder.

Back to substance, folks. Please.

I think we can all agree that, with the tough questions, Pence wasn’t very good on the fly.

Thank you, fly, for helping the debate fly by. 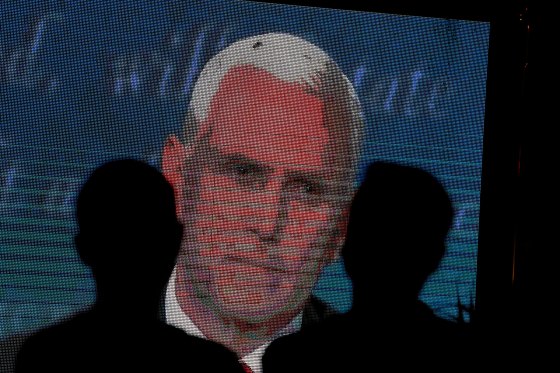 Rescue Animals Are TIME’s 2020 Pet of the Year

‘I Can’t Put All My Eggs in One Basket.’ Here’s What Creators Think of Instagram’s TikTok-Style ‘Reels’