As much of the rest of the world struggled with the coronavirus pandemic, it looked like many places across Asia and the Pacific were successfully suppressing the virus.

Australia’s response to coronavirus had been so successful that some experts said it could be eliminated in the country. The number of coronavirus cases in Japan dropped significantly in late April following an earlier spike. And in Hong Kong, life had begun to resemble pre-pandemic times—employees had largely returned to office buildings and students had gone back to school. Officials across the region were starting to plan travel bubbles that would allow international business and tourism to resume, as well.

But that optimism is being replaced with renewed lockdowns and social distancing restrictions as cases across the region tick up again. On Thursday, both Tokyo and Hong Kong hit daily records for new coronavirus cases. And a growing outbreak in Melbourne, Australia’s second-largest city, forced the state of Victoria back into lockdown on July 8, with residents mostly required to stay home. On Friday, Australia hit the second-highest daily rise in cases, 438, with all but 10 in Victoria.

Experts say resurgences like these—even in places that successfully fended off earlier stages of the virus—are inevitable, and should serve as a warning to the U.S. East Coast and parts of Europe that are reopening after apparently gaining control of their outbreaks. To be sure, the raw numbers of cases are small compared to those seen elsewhere in the world, especially the U.S. The record for new cases in Tokyo, population on Thursday was 286 and in Hong Kong, a city of 7.5 million, there were 67 new cases. But experts say the lessons are still useful. New York City, for instance, marked its first 24 hours without recording any deaths from the virus since the start of the pandemic and is slowly moving towards reopening. (New York, with a population of 8.4 million, recorded 767 new cases.)

“To put out a small fire, you need an excellent system for identifying cases, quickly isolating them, and tracing and quarantining their contacts,” says Yamey. “This all requires strong data and health information systems. As you saw in U.S. states like Florida and Texas, if you don’t have these capacities, then a small fire can quickly become an inferno.”

Experts say that local officials must be prepared to re-implement onerous lockdowns and social distancing requirements. In many countries, this will require a fine balancing act between economic recovery and the number of virus cases public health systems can handle.

Hassan Vally, an associate professor in public health at La Trobe University in Melbourne says that increasing community transmission is a key sign that lockdown measures may need to be put back in place.

In late March, Victoria, like much of Australia, went into lockdown restrictions that required most people to stay home except for essential activity like grocery shopping. Beginning in mid-May, those restrictions were slowly lifted as cases declined. Then, early this month, officials ordered lockdowns for some 5 million people. With the latest surge, officials say they may have to tighten lockdowns even further.

“We’ve seen what uncontrolled exponential growth in the spread of the virus looks like and the potential this has to overwhelm the health systems of countries and we don’t want to go down that path again,” Vally says. “As soon it is apparent that the number of cases is increasing consistently, then restrictions need to be implemented.”

But researchers also acknowledge locking down a second time may prove more difficult than the first. “In the beginning of the first wave, the general population is still quite willing to go along with a lot of the public health measures, social distancing and so on, but now fatigue may have set in so some of the measures may be more difficult to implement,” says Ben Cowling, a professor of infectious disease epidemiology at the University of Hong Kong.

Ellen Sowersby, a 35-year-old contract administrator who lives in a suburb of Melbourne tells TIME that going into lockdown again feels like a major step backwards. She says she agrees that the measures are needed, but she still feels a bit defeated.

“It is harder to come to terms with the situation a second time around,” she says. “I think it’s coming to terms with the harsh reality that this virus could be with us for some time and we’re not going to get back to ‘normal’ any time soon.”

When more than 100 new coronavirus cases emerged in China’s capital city Beijing, following more than 50 days without any confirmed infections, officials jumped into action. Authorities declared that they were entering “wartime mode.” They placed neighborhoods under lockdown, closed schools and sports facilities and tested some 7 million residents.

Within a matter of days, a top medical expert declared that the situation had been brought under control.

Similarly, when new cases jumped in Wuhan—the original epicenter of the outbreak—in May, officials quickly tested some 10 million people in the city of 11 million.

Kenji Shibuya, the director of the Institute for Population Health King’s College London and a Senior Advisor to Director-General of the WHO, says that officials should be ready for new waves of infection. “The key is to get prepared for a resurgence by expanding testing capacity and building health care surge capacity,” he says.

Some places in the region—like Taiwan and New Zealand—have so far managed to keep coronavirus infections under control. For them, border control has been important, says Yamey.

Many countries across Asia-Pacific have implemented travel and quarantine restrictions, but even some with tight rules haven’t been immune to cases being spread by incoming travelers.

Australia closed its borders to anyone who isn’t a citizen or resident in March. All international arrivals are subject to 14-day mandatory quarantine in hotels. Despite the precautions, experts say that the latest spike appears to be at least partially driven by incoming travelers.

Some media reports have alleged that security guards working at the quarantine hotels have had sex with people quarantined in hotels. Officials in Victoria launched an official investigation into the spike.

Vally, in Melbourne, tells TIME that the recent spike is attributable to several factors, including issues with quarantined travelers.

“Countries that have controlled spread of infection remain vulnerable to renewed outbreaks via importations, highlighting the role travelers play in spreading infections in our interconnected world,” says Leder.

In Hong Kong, despite a strong contact tracing system and the widespread use of face masks, locally-transmitted cases are surging.

Cowling says that masks help, but they aren’t sufficient to stop the virus alone. Neither is testing and contact tracing by itself, he says.

“For the U.S. there’s been this vision that after testing is enhanced and contact tracing is put in place, states in America can rely on test and trace to suppress COVID transmission and they won’t need the social distancing anymore,” Cowling says. “But the experience in Hong Kong indicates that that may not be true. Test and trace will help. Masks help. But some social distancing is still going to be required for some time to come.”

Experts warn for the need to remain vigilant, even as case numbers begin declining and some social distancing measures are lifted.

“Don’t get complacent,” warns Cowling. “Although numbers are coming down when you’re doing well, once people begin to relax, sooner or later there will be a resurgence and it may be more difficult to get on top of a second wave because of fatigue in the population with the public health measures.”

Vally says that social distancing, hand washing and wearing masks need to remain in place. “Individuals should enjoy their newly acquired freedoms but understand that this comes with a price to be responsible in the way that they go about your daily lives,” he says. 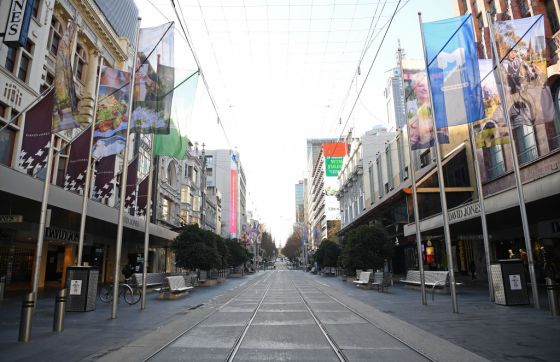 U.S. Will Have Enough COVID-19 Vaccines for All Adults by End of May, Biden Says

How to Raise Resilient Kids

This County Tried to Ensure Racial Equity in COVID-19 Vaccinations. The State Said No

How to Stay Social When You Never See Your Work Friends

Technology admin - March 3, 2021
0
In a year where mass transit on airplanes, trains and buses has had lower traveler numbers in the wake of the Covid-19 pandemic, one...

Economy admin - March 3, 2021
0
Millions in precarious jobs are betting scant savings on worthless stocks and cryptocurrencies via share-dealing appsThe US economy’s K-shaped recovery is under way. Those...

Technology admin - March 3, 2021
0
The rapid growth of e-commerce in Indonesia, especially during the pandemic, is placing increasing demands on its supply chain infrastructure. But the country’s logistics...

Bitcoin and Robinhood will end badly for those who can least...